In May this year, Sara Blichner started as a post-doctoral researcher at the Department of Environmental Science, Stockholm University. Earlier, when working on her PhD in meteorology at the University of Oslo, she had been in contact with Ilona Riipinen, and Stockholm University became an attractive next step. She has contributed to the latest IPCC report and is now involved in the EU’s FORCeS project, which tries to understand and reduce the long-standing uncertainty in anthropogenic aerosol radiative forcing. 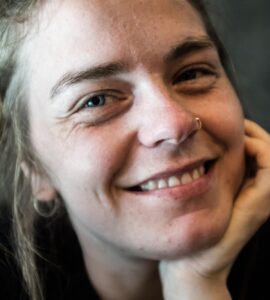 Sara’s main research focus is on aerosols, particularly biogenic organic aerosols which are separated from the anthropogenic ones. In plain language: all trees emit gases which react in the atmosphere and produce aerosols, resulting in a cooling effect on the climate. When the temperature is rising, vegetation tends to produce more of these gases, resulting in more aerosol and more cooling. Sara wants to follow this chain more in detail, in order to make the organic aerosol component in climate models more precise.

She describes a normal work week with “a lot of programming, running tests, waiting for results, and analysing the output.” And meetings. Even though she would like to go on field trips like many of her colleagues, her contribution to research is elsewhere. “Actually, I can do most of my work with an internet connection,” she says.

So far, she hasn’t been to Stockholm, and the zoom-interview takes place from her base in Helsinki.

“But in the next couple of weeks, I hope to be able to move to Stockholm,” she says.

Contribution to the latest IPCC report

“My ex-supervisor was lead author of chapter six, and my work was mainly to process data and produce figures for that chapter. Back when the last IPCC report was released in 2013, I was studying mathematics and was a little unsure about my future. It was while reading that report that I decided to change fields to climate science. And now I am really quite proud to be a contributing author to the new one!”

She got involved in the IPCC report in 2018, running parallel with her PhD thesis.

“It was a really interesting process, with the iterations and to see how the report evolved. It is a very important piece of work and involves a lot of impressive people. This report becomes the basis and frame of reference for policy making on questions of vital importance for humanity. I definitely want to be a part of it again, if I can,” she says.

Part of the EU’s FORCeS project

The FORCeS project brings together 20 European research teams, including several Bolin Centre scientists, in an effort to reduce uncertainty in aerosol effects on climate. What is your role in FORCeS?

“I work with an Earth System Model and we want to incorporate as many features of organic aerosol as possible into the model. But we must be smart though. Too many variables will slow the simulations down too much and render the model impractical, so we need to choose the essential ones. It is also really cool to be part of this EU-project with so many interesting people and institutions involved.”

She also appreciates the width at the Department of Environmental Science, with people engaged in both lab, campaigns and modelling on different scales.

Looking forward, what is the plan for the next five years?

She believes that when policy catches up with climate science, there will be a need for different kinds of research questions.

“If you look at climate policy now, in a way the only advice science needs to give is to start cutting emissions already, focusing primarily on CO2 and methane. And this we’ve already known for quite a while and there is no new science needed. But in the future, as we start to see real climate action, I think it will become clear that a lot more intricate understanding is needed. For example, determining the net effect of planting a forest involves the effects of changing albedo (reflectivity of the surface), aerosol, changes to meteorology (winds/rainfall) and carbon storage”

“Some of these new questions are already here, and they are going to be even more relevant to answer,” she concludes.

This website uses cookies to improve your experience while you navigate through the website. Out of these, the cookies that are categorized as necessary are stored on your browser as they are essential for the working of basic functionalities of the website. We also use third-party cookies that help us analyze and understand how you use this website. These cookies will be stored in your browser only with your consent. You also have the option to opt-out of these cookies. But opting out of some of these cookies may affect your browsing experience.
Necessary Always Enabled
Necessary cookies are absolutely essential for the website to function properly. These cookies ensure basic functionalities and security features of the website, anonymously.
Functional
Functional cookies help to perform certain functionalities like sharing the content of the website on social media platforms, collect feedbacks, and other third-party features.
Performance
Performance cookies are used to understand and analyze the key performance indexes of the website which helps in delivering a better user experience for the visitors.
Analytics
Analytical cookies are used to understand how visitors interact with the website. These cookies help provide information on metrics the number of visitors, bounce rate, traffic source, etc.
SAVE & ACCEPT
Powered by